Glowing Reviews for Over Three Decades

“Loren Koch’s operation has the two most-prized-by-diners attributes going for it: handsome atmosphere and meticulous service…steaks and prime rib, I’ve found above reproach.”

“In our humble opinion, the best steak in Omaha is the ribeye at Brother Sebastian’s.”

We are pleased that official restaurant critics have appreciated our old world style environment, delicious food and impeccable service. We are even more honored that the public has recognized us over the years with many Best of Omaha awards in the “Most Romantic” and “Best Prime Rib” categories. Join us for a memorable experience of your own. Contact Us

The Story Behind Brother Sebastian’s

First-time restaurateur Loren Koch was inspired by Spanish monasteries sprinkled throughout the state of California. The monks were renowned for their hospitality and kindness to visitors. Koch designed Brother Sebastian’s to re-create the warm ambiance of the rustic abbeys, while paying homage to the “Brothers” that dedicated their lives to their beliefs and the care of others. Brother Sebastian’s Steakhouse and Winery opened in 1977 and provided visitors a place to “get away” and enjoy great food in an upscale restaurant with an imaginative, comfortable atmosphere. Brother Sebastian’s burned to the ground in February of 1996. Rebuilding began immediately and it reopened just 8 months later. While most “theme” restaurants have come and gone, Brother Sebastian’s timeless design, delicious food and great service have allowed it to become one of the top ranked restaurants in Omaha! 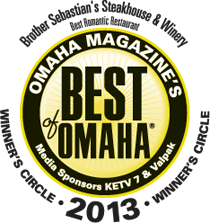 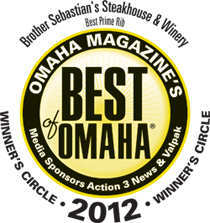